TOKYO, 21 Sep – Australia were made to work overtime to see off a physical Fiji in a bone-jarring Pool D game at the Sapporo Dome on Saturday.

After a first-half scare, the Wallabies stormed home to win comfortably, with Silatolu Latu stealing the show with two of their six tries.

Given the creative flair of both sides, this had the makings of one of the games of the tournament. And the Wallabies, unbeaten in their last 17 games against the Fijians, had to weather early pressure from the South Pacific Islanders.

It was end to end stuff early, and Fiji hit back after a nervous opening to earn the first points after just four minutes, the Australians penalised for not releasing. Ben Volavola converted and Fiji were off and running. 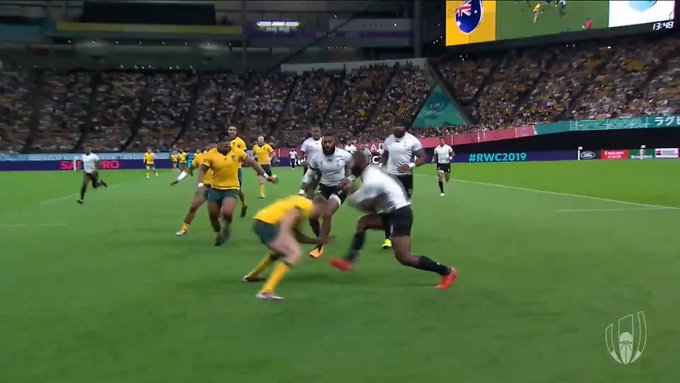 Fiji, who had lock Leone Nakarawa, number eight Viliame Mata and wing Josua Tuisova, included in a powerful starting XV then extended their lead with Peceli Yato finishing off a brilliant backline move in the right-hand corner. Sheer power out wide from wing Josua Tuisova enabled him to beat Reece Hodge and Christian Lealifano before Yako cruised over. It was 8-0 and Australia desperately needed to regroup.

Yato was a constant thorn in the defence and they had sight of the line again after 12 minutes .

But Australia began getting some momentum from their scrum and it laid the foundations for their opening try in the 18th minute, Michael Hooper shrewdly changing his angle to find the line to score, which was comfortably converted by Lealiifano to cut the deficit.

Australia were paying the price for their indiscipline and the Fijians extended their lead through another penalty from Volavola, with the Wallabies infringing after another great break from Yato in the 23rd minute.

The Wallabies must have felt like they were being hit by sledgehammers as the big Fijians kept ramming them time and again.

Another beautiful penalty from Volavola in the 27th minute put them 14-7 up but a slick backline movement from the Wallabies in the 36th minute was finished off by Hodge, pictured above, in the right-hand corner. Lealifano converted to make it 14-12.

Straight after the break, the Wallabies were looking to spin it wide when a loose pass from Samu Kerevi was snapped up by Waisea Nayacalevu, who raced from just over halfway to score Fiji’s second try.  Volavola converted and Fiji were breathing easier at 21-12 ahead.

In the 50th minute, this time it was Fiji who were penalised at the breakdown and Hodge, a long-kicking specialist, converted to cut the deficit to six points.

The Islanders conceded a succession of penalties but the Wallabies, who now had Will Genia calling the shots for Nic White, were unable to cash in immediately until Latu forced his way over from a rolling maul to leave the Wallabies trailing 21-20 after Hodge missed the conversion.

Fiji, who had Levani Botia yellow carded, could not stop Latu crossing for his second try from a rolling maul, but Matt Toomua, who came off the bench, was unable to add the extras.

The Wallabies’ momentum was in full gear now and Kerevi gave them control of the match in the 69th minute to put them 32-21 ahead with the conversion. Marika Koroibete crossed soon after another slick move to put the result beyond doubt, with Toomua converting to take them 39-21 ahead.